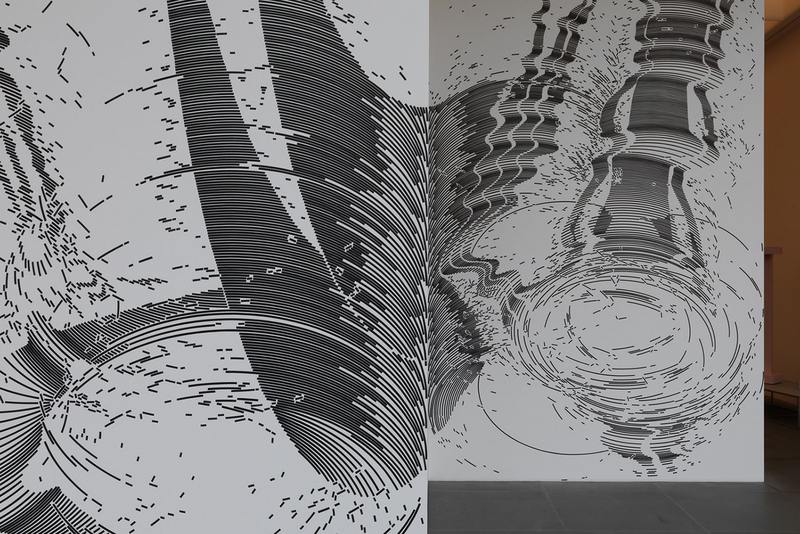 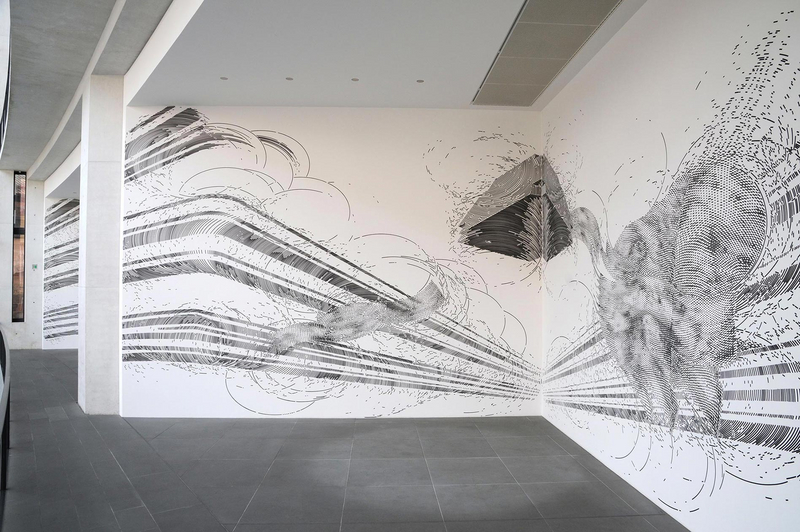 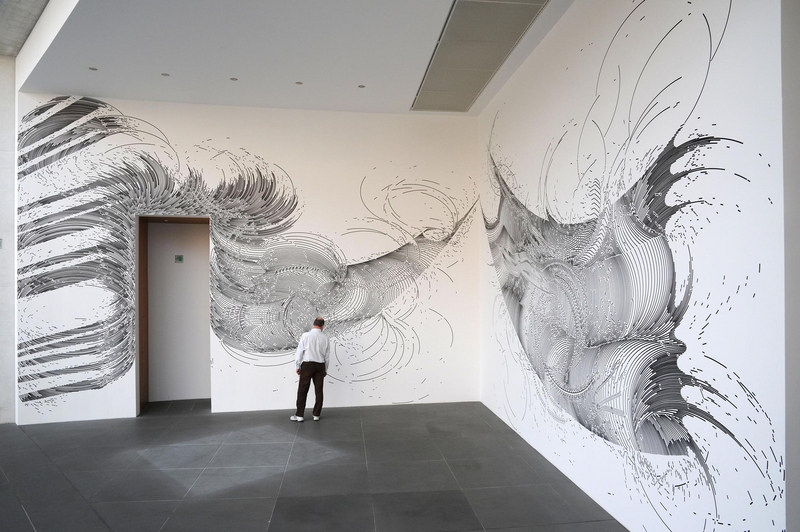 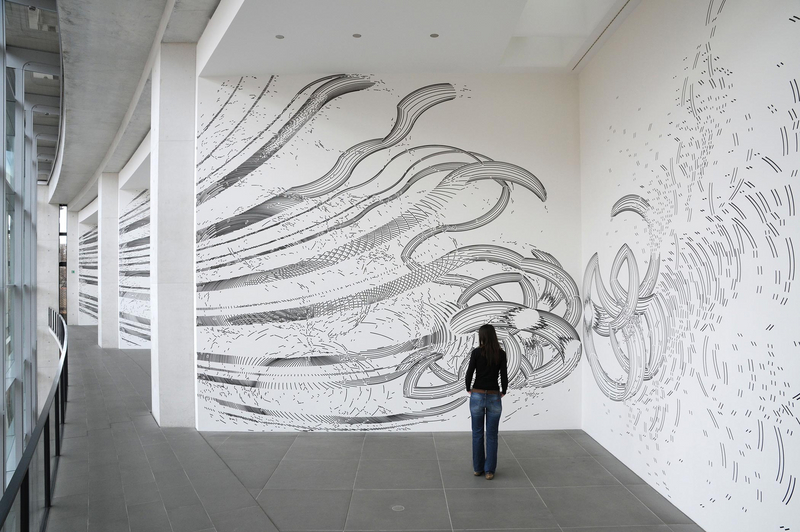 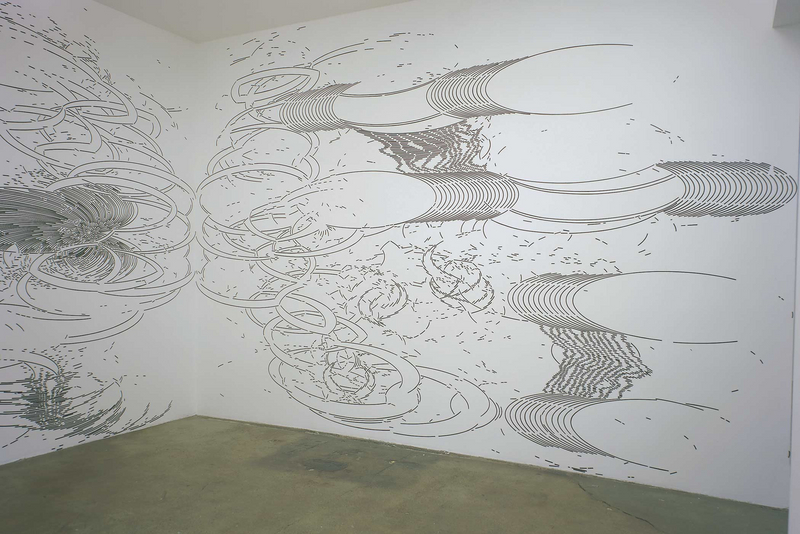 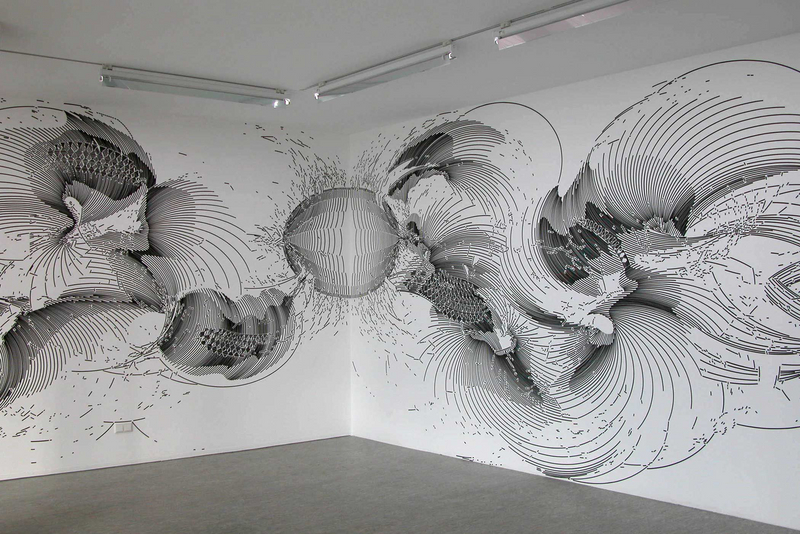 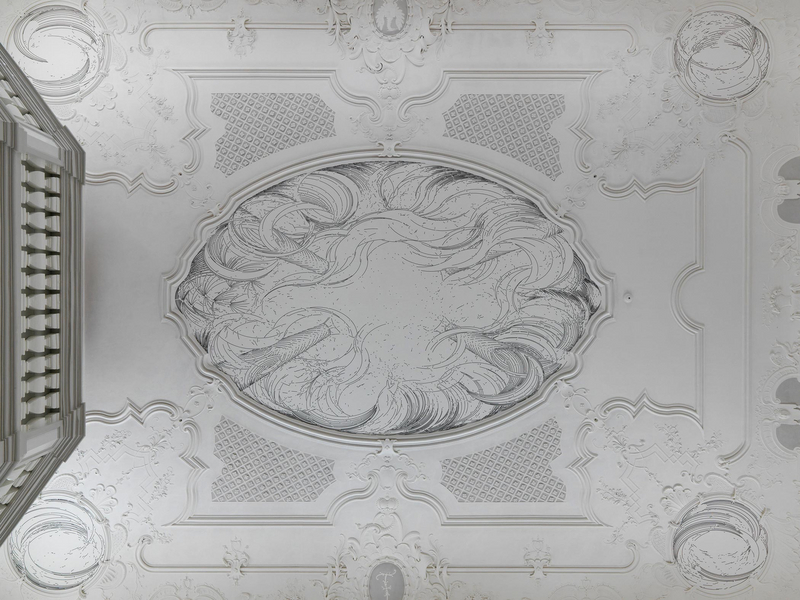 In celebration of this summer’s PGA Championship being held at nearby Whistling Straits, the John Kohler Arts Center is pleased to present an extraordinary art installation modeled loosely on the sophisticated game of golf. Although similar to golf in spirit, the „art course“ created by German artist Gerhard Mayer and New York artist John Powers captures the imagination in a strikingly different way.

Devotees of golf maintain that it is not simply about playing a game or being able to hit a ball into a hole – it is about being centered in the present and, beyond that, about using it as a model for navigating the world in which we live. 18 HOLES: AN ART COURSE reflects upon the concept of golf while simultaneously incorporating the challenges and rewards of engaging with art.

The artists, each a master of precision and studied detail, have transformed the gallery into a unique coolaborative installation. Once we step into this amazing space, time and reality slip away, leaving us (the players) to roam freely in a place that writer Jeff Wallach, author of Beyond the Fairway, has termed „ the game’s unmanicured terrain.“ By this, Wallach means a place where we, in our own minds, have strayed from all rules and straightforward progressions into a place where we „ play „ in order to discover or understand something deeper about ourselves.

On the Art Course , holes number one and eighteen are predetermined; the course between them is open to selfdetermined play. The first hole, just inside the entrance to the gallery, is accessible by a tee, a radial arrangement of Mayer’s lines on the floor that indicates the starting point for the game. As the ball sits on the two – dimensional tee, it is poised to enter the first hole – a horizontal tube that passes through the entry wall. The tubular hole is seemingly straightforward, yet focus and aim, in tandem with the precise amount of energy, are required to send the ball to the other side. Thus hole number 1 serves as a place to „ become focused „ . The eighteenth hole offers a conceptual challenge – it is the end of a journey and a place where we may find ourselves completely centered. Not actually a cavity in the floor as holes 2 through 17 are, hole number 18 is a nucleus of fragmented lines.  Tightly concentrated, yet never touching one another the stark black lines form an optically challenging core on the white floor, resulting in a visual hole that is the game’s conceptual end – point. If we as players have, indeed, become focused and achieved the desired mind – body equilibrium, we are invited to give physical evidence of this through the execution  of a delicate putt that centers the ball on the planar „ hole „ .As in any game, there are rules that must be followed. Yet as long as the rules are followed, we may „ play „ in the manner of our own choosing. The path is ours to determine, the challengers are none other than ourselves. With or without a club and ball, we can embrace the infinite possibilities and enter into the contemplative zone that Mayer and Powers have offered, while keeping in mind that, during any so – called game, something much more meaningful can actually take place.

Inside this expansive white room, Gerhard Mayer has laid the groundwork with rigidly patterned line drawings that sprawl across the floors and spin up the walls. Mayer adheres to a set of seven „ self – proscriped rules „ when painting his gently arching and swirling black lines. With these rules, Mayer restricts himself to elliptical lines – never dots – that, may neither intersect nor become complete ellipses. Additionally, the lines may only be created using one size and form of elliptical stencil; the arcs must always be horizontal, and never transgress an edge or corner. In each place he positions the stencil, three or four lines must be drawn and each must have visible white space separating it from the next. The result is an apparent alteration of space. Oblique angles and whirling curves seemingly expand in places, contract in others, and even erupt from the floor, conveying the sense that one has stepped into a zone of extraordinary energy. The sharp black lines create optical impressions around the holes, challenging players to draw on what they understand rather than what is physically seen. Despite the strictness of his own rules, Mayer finds literally endless possibilities, mapping the terrain as he goes and creating widely diverse patterns. His imagery reflects tensions similar to those found in golf: the need for precision, spatial interpretation, an open mind, and creativity, as well as a solid grounding in physics, particularly in terms of trajectory, thrust, gravity, and interrelatedness.

Strategically integrated with Mayer’s drawings are the large – scale additive sculptures of John Powers. Power uses repeating patterns of three – dimensional blocks much in the same way that Mayer uses lines, in that symmetry, rythm, relationships, harnessed energy, and precision become embodied in something visual. Yet while Mayer’s lines suggest energy radiating from a source, Powers’ pieces seem to be the source, an explosion of particals frozen in time. The subtly repeating patterns that Powers develops and adheres to ad infinitum are hard to identify individually, yet from what may at first appear to be frenzied chaos stems a strong and overriding sense of order and control. Simultaneously and even conversely, Powers’ complex forms – made from thousands of symmetrically conjoined snow – white foam blocks – syntesize with Mayer’s optical planes. These sculptures add a complex spatial element, appearing to have somehow extracted themselves from the linear plane while also suggesting sound, as in a repeating series of visual booms and crashes.

In the Art Course, Powers’ sculptures have, in essence, become obstacles or significant factors in the player’s path. For him, elements that ultimately constrict and control the way people interact with a space are a fascinating aspect of art created to exist in a public space.  To encounter one of his large – scale sculptures is to confront something that is at once imposing and fragile and that elicits a response of momentary indecision or contemplation. The long floor piece resembles concrete barriers for traffic or crowd control, yet its soft, delicate, and perfectly white material, in tandem with a visual complexity nothing short of amazing, renders it solely a conceptual barrier. As in Zen practice and in golf, the real barrier – and the path around it – must be found within the individual.

Mayer and Powers both draw on the idea of „ play „ in their work. The artists, alongside scientists, golfers and countless others, have come to value „ play „ as a way of releasing thoughts and discovering truths through experimentation and the relaxation of the mind. For Mayer, it is the discipline of the rules and the vast creativity within the rigid guidelines of the game. For Powers, mathematical formulas, complex symmetries, and influentual thinkers such as Alfred Adler and theories on „ serious play „ as a path to opening the mind have been integral to his approach. In keeping with these ideas, both artists consider the labor – intensive and inherently time – consuming making of the installation to be a central aspect of its significance as a work of art – for someone else to execute the making of the work would mean something notably different. Their intensive techniques make the expenditure of time visually palpable.

Perhaps the strongest connection between these artists’ work and the game of golf is a shared dedication to suspending calculated time and taking an introspective journey. In a time where things move increasingly faster and more efficiently, there is a human need to slow things down, create blockades for oneself, and generate a space where pressured time is dethroned and the mind is allowed to linger, puzzle, and absorb things that might otherwise be lost.

Golf is relished for ist endless variability in strategy, style, and the „ wild card „ factors of natural events, hazards, and other players. In this installation, Mayer and Powers have payed homage to a term originally used by golfers for an obstacle, „ stymie „ . Both artists, through visual or physical impediments, effectively stymie the play, adding a vital and stimulating element of challenge. Watching the form of an expert golfer as s/he plays is aking to viewing Power’s presentation of pattern; both are so seemingly flawless that it is easy fort the uninitiated to overlook the tremendous comprehension, effort, and intensity embodied within each. Also analogous to golfers, who view their game as a microsom of an individual within the universe, perceiving an ever – shifting balance between individual will and the physical laws of nature, is Mayer, who similarly regards his drawings.

Employing the central tenets of physics ( as do golfers, knowingly or not ), Mayer creates ellipses that suggest gravitational force and the movement of particles. His lines, which never touch one another, appear to be in motion, spinning and receding. Mayer provides the visual analogy of a wet dog shaking – the water flies off in parallel arcs that, conversly, describe the shape of the dog itself. His drawings indicate energy flow within a given dynamic system, essentially describing the relationship between the force and the object at the center of the force, though such an object is never seen. Both Mayer and Powers create systems for themselves to „ play „ by and function within, thus discovering an expansive universe of possibilities within a seemingly finite system. So, too, do golfers. In the Art Course, the player travels an imaginary, perhaps even spiritual, landscape where, as Wallach says, „ the process „ is  the destination is the journey is the end „ . 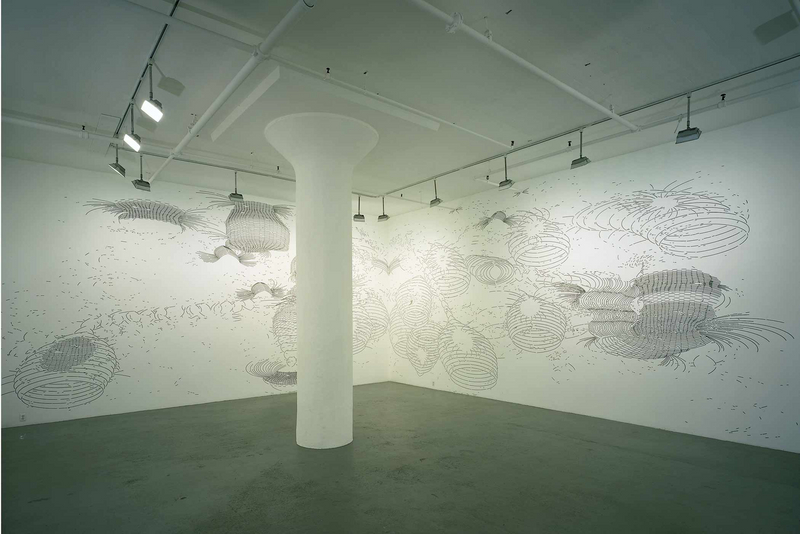 Gerhard Mayer
In delightfully echt – Germanic fashion, this draftsmanartist follows seven rigid, self – imposed rules. He must use an elliptical template, but he’s not allowed to draw a complete ellipse, no rare any lines allowed to touch each other, etc. Otherwise, Mayer can do anything he wants, and the results tend to have an appealing, anarchic fastidiousness. The most impressive, a fifty foot wall work full of scattering arcs, dashes, and spiralling have shapes, could be an explosion in a Slinky factory. Mayer may be working in Sol LeWitt’s shadow, but the sheer idiosyncratic energy of his drawings should make the great delegator nerveous. 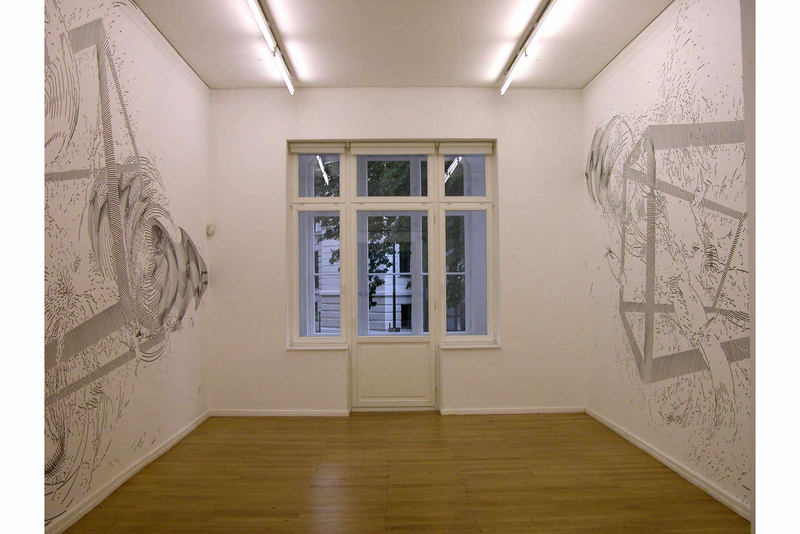 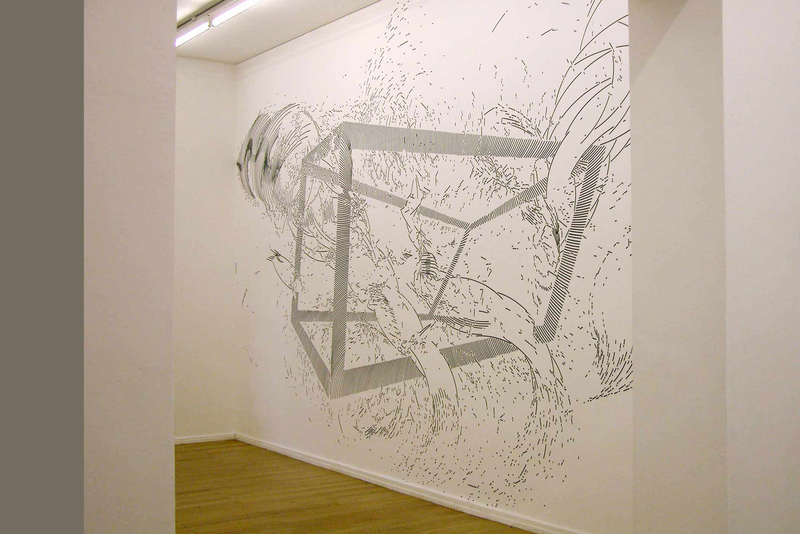 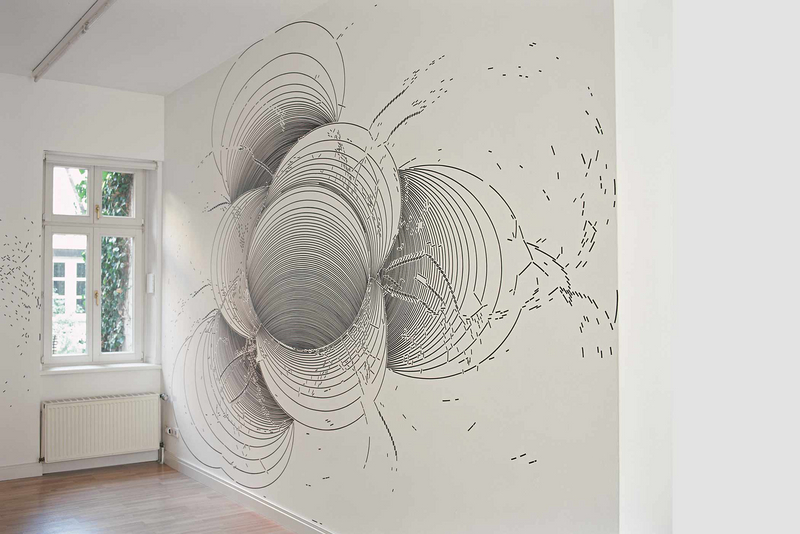 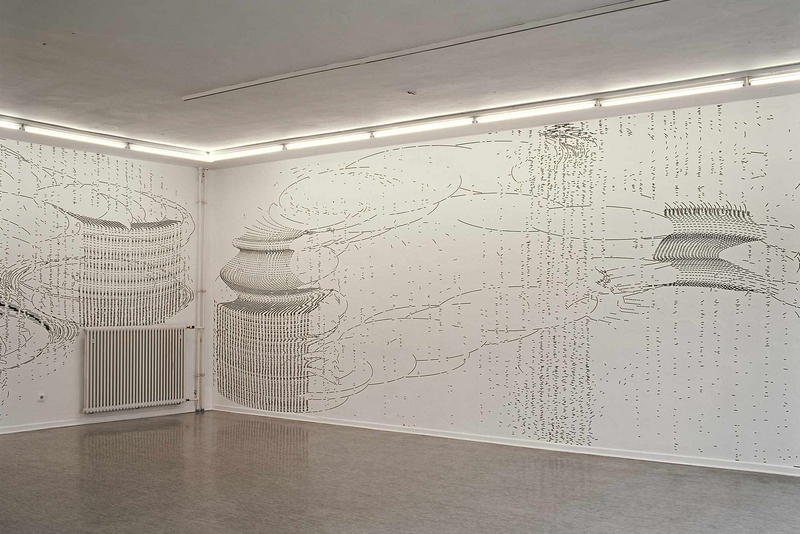 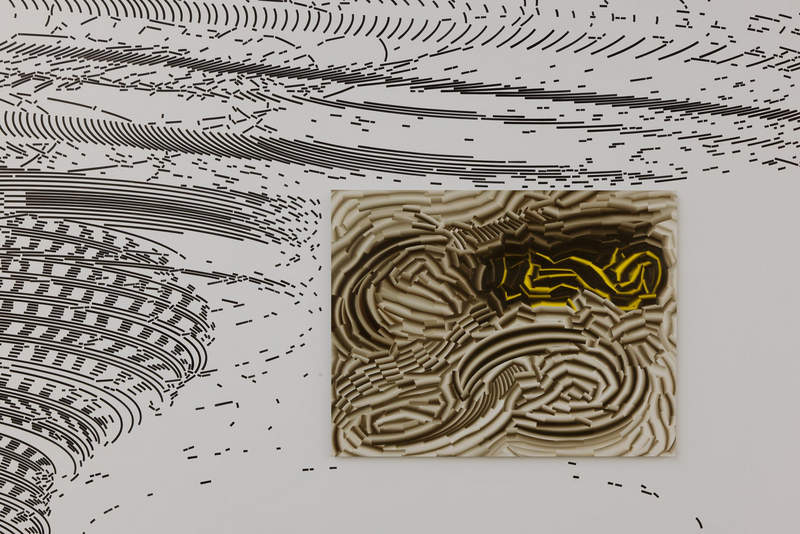